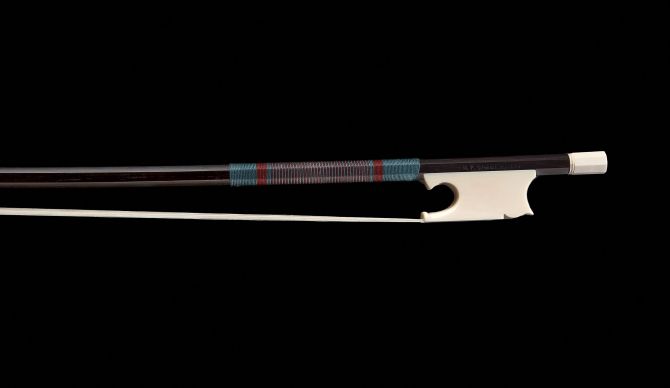 All shell products are legally imported to us from legitimate and recognized sources. All US permits are utilized when importing - there are three different US Import permits required for each shipment.

Our Mother of Pearl shell is a specially sourced form of MOP from the Philippines where the shell is spun, by nature, with layers of highly iridescent white pearl and an occasional ultra thin layer of golden color pearl. The golden micro-layers are not seen as gold directly to the eye but this feature gives the MOP from this shell a particular brilliance and light catching quality not seen in other MOP shell.

This feature of color and iridescence is only found in the Philippine shell. This is not your average Mother of Pearl.

About our imitation opal:

This is truly a great material. Incredible beauty and indefinite lifespan. Read more about this material on our opal page.

As a brief guide to the historical use of pearl in bows:

The French The Peccatte school would have, for the most part, been using the Ormeau. This is a member of the Haliotis family that lives off of the coast of North-Western France. It often has a small, tight flame that runs through the shell. It is a very small shell, making it difficult to get pieces long enough tio make a slide. I believe that it was generally worked along the natural curve of the shell and then flattened. Its main value today is due to its historic use and would otherwise be considered too marginal.

The Pajoet school around the same time was using the green abalone from what is now Baja and Southern California. They favored the piece from the inside and around the muscled scar—i.e. the heart—of the shell.

Viorin to modern day French use, for the most part, the Awabi shell from Japan. Japan was reopened to Western trade in 1853.

The English... such as the Hills were, for the most part, using White Mother of Pearl for their standard bows. I assume this shell came from Australia due to their relations to the ex-pat felons living there. However, in fancy, Gold-mounted bows made by such makers as Tubbs you will sometimes see the "heart" of the black abalone.

The Germans... In their early bows were using, I believe, fresh water shells. Makers such as Bausch would, at some times, use Green ab heart. In most of the 20th century their silver-mounted bows were fitted with very high quality green flamed abalone with most shifting to awabi in the latter part of the 20th century to the present day.

The American School... Is too promiscuous for the space and time available.

Mother of Pearl Dots for Inlay