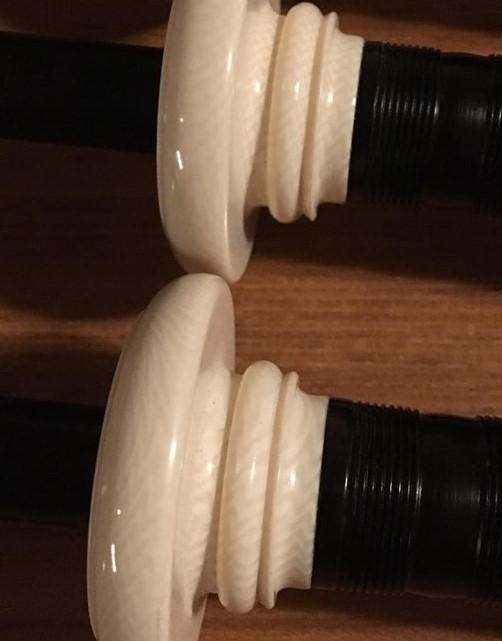 Dave Warther's Resin-Ivory™ imitation ivory for bagpipes. Resin Ivory is the highest quality imitation ivory we have seen, worked or handled - ever. Arvorin and other alternative ivories are made as spun polyesters but Resin Ivory™ is a resin based material that has greater strength and beauty. The spun polyesters will chip and shatter easily with a resulting glassy area seen. Resin Ivory™ is much more like real ivory where it takes a good deal more effort to chip the material.

The +S grade looks so much like real ivory that customs agents are going to think it is real ivory but it flouresces a rich purple under a black light so they will be able to discern it from real ivory once they check it. The +S material is the ultimate in ivory replication with a non-ivory material.

This material works just like real ivory with conventional tools and takes a high polish by buffing with white jewelers rouge on cloth or felt wheels/pads. One needs only sand with 400 grit wet/dry paper and then take it to a buffing wheel or hold a felt pad to the fitting as it turns.

This material is also the best imitation ivory we have scrimshawed and engraved. There is no squishiness when scriming and there is no bleeding of the ink into unwanted areas as seen on other imitation ivories. It works like ivory, polishes like ivory and scrims like ivory!