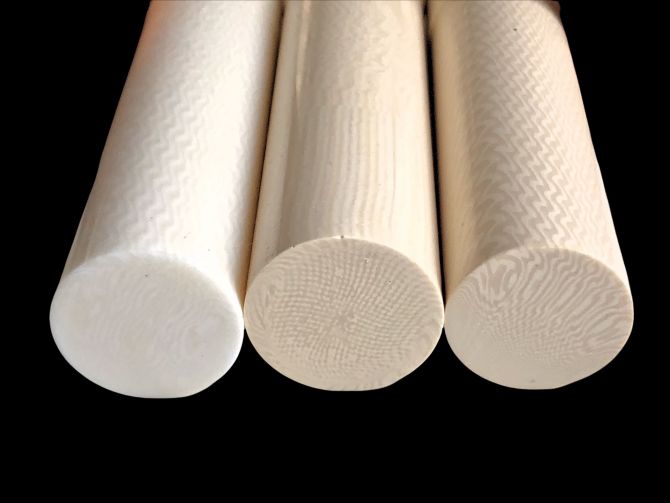 Dave Warther's Resin-Ivory™ Top grade Imitation ivory. Resin-Ivory™ is the highest quality imitation ivory we have seen,worked or handled - ever. Arvorin and other alternative ivories are made as a spun polyester but Resin Ivory™ is a resin based material that has greater strength.

Three grades shown in above photo.

Leftmost in photo is Q4 grade: Whiter, denser and stronger than our standard Resin Ivory. Developed for the 4 areas where real ivory was used in cue sticks - hence the name Q4. This material has become popular with knife makers, bagpipe makers and other artisans. You will find Q4 on the main listing page in a category of its own. If you look under Lathe Turner's Corner near top of website you will see Q4 listed there.

Middle rod in above photo is +S grade Resin Ivory: Looks just like real ivory with lengthwise straight grain and it has the end grain patterning of real ivory. Color is that of 30 year old aged ivory. It is whiter than this photo conveys but not white-white like Q4. The +S designation is for the Shreger pattern lines in the end grain.

Rightmost rod in above photo is R grade (R is for regular grain) Resin Ivory: This material has the same strength and properties of our +S grade. It has a wavy grain when viewing the lengthwise grain and a bit of swirl pattern when viewing the end grain. A great material that at first glance looks like real ivory. Upon close inspection the wavy grain conveys to a skilled viewer that this is not real ivory - it looks sharp but real ivory does not have a wavy grain.

We recommend the Resin-Ivory™ R grade for most applications and especially in applications where the end grain is not visible. The +S grade looks so much like real ivory that few will be able to tell if it is real or not. It does fluoresce a vivid purple under a black light so customs will be able to discern it from real ivory once they check it. The +S material is ideal for gun grips and three dimensional projects where the end grain is visible.

This material turns like butter on a lathe and takes a high polish by buffing with white jewelers rouge on cloth or felt wheels/pads. One needs only sand with 400 grit wet/dry paper and then take it to a buffing wheel or hold felt to it as it spins in the lathe. It also accepts a clear coat finish without any resistance or any proclivity to peeling, etc..Glues to wood with white glue and to other materials with super glue or epoxy.

This material is also the best imitation ivory we have scrimshawed. There is no squishiness when scriming and there is no bleeding of the ink into unwanted areas as seen on other imitation ivories. It scrims like ivory! It also works like ivory with conventional saws and files.